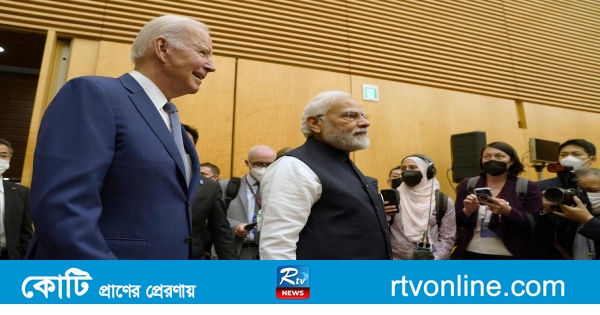 Committed to making the India-US partnership “one of the closest on Earth”, the US President said. Prime Minister Narendra Modi and US President Joe Biden met on the sidelines of the Tokyo Quad leaders’ meeting for a bilateral meeting, their second bilateral meeting in just over a month, with the two leaders meeting virtually April 11 before India – US 2+2 Dialogue Ministries of Defense and Foreign Affairs. The two countries announced a technology cooperation initiative and an investment initiative with the US development agency. Mr Biden, expressing an idea he’s had for years, said he would work to ensure the US-India relationship was “among the closest” in the world. Speaking ahead of the bilateral dialogue, which was held at Japanese Prime Minister Fumio Kishida’s official residence in Tokyo, Modi called the India-US partnership a “partnership of trust”. “Our shared values ​​and common interests in many areas, including security, have strengthened the bonds of this trust,” he said, adding that bilateral trade and investment was growing but “well below” of their potential, according to an English translation of Mr. Modi’s remarks, most of which were delivered in Hindi. “Mr. Prime Minister, there is so much our countries can and will do together, and I am committed to making the U.S.-India partnership one of the closest we have on Earth,” Mr. Biden.
“Democracies deliver”
Mr Biden also referred to the concept of “democracies that deliver”. The president and his administration have repeatedly described the world as witnessing a battle between democracies and autocracies. “During our video call in April, you emphasized the need for democracies to keep their promises. I think that’s what we’re doing today. We are also talking about how to deliver through the Quad and US-India cooperation,” he told Modi during his opening speech. The two countries signed an agreement that would allow the US International Development Finance Corporation (DFC) to expand investment support in India for SMEs, healthcare, renewable energy and infrastructure, among others areas. “I am sure that with the investment incentive agreement between India and the United States, we will see concrete progress in the direction of investment,” Modi said at the start of the meeting. meeting. India and the United States have also launched an Initiative on Critical Emerging Technologies (iCET), an initiative led by the two National Security Councils to cooperate on critical and emerging technologies. The Indian reading lists examples such as quantum computing, artificial intelligence (AI), 5G/6G, biotechnology, semiconductors and space. The United States, in its reading, said it would join six of India’s technology innovation centers in supporting at least 25 joint research projects this year in areas including AI, data, health, climate and agriculture. Significantly, Mr Modi said India and the United States “share the same perspective” on the Indo-Pacific region, unlike positions on the Ukraine-Russia front. The US reading said “Leaders noted with pleasure the establishment of the Indo-Pacific Maritime Domain Awareness Partnership.” India’s adherence to the Biden administration’s economic cooperation framework for the region – the Indo-Pacific Economic Framework (IPEF), launched on Monday – has been noted positively by both parties. The Indian reading highlighted the flexible nature of the framework and its consideration of “respective national circumstances”.
US highlights Ukraine, India is silent
The US minutes of the meeting said Mr Biden had condemned Russia’s “unjustifiable war” and that the two leaders had “discussed how to cooperate to manage the disruption caused by the war in Ukraine, in particular the rising energy and food prices, in order to protect their respective interests”. citizens and the world”. The Indian reading was silent on the Russian-Ukrainian war. Since Russia invaded Ukraine on February 24, the two countries have sought to manage their notable differences over the conflict – in particular India’s purchase of energy at a discount from Russia and its refusal to condemn Russian aggression, including at the United Nations. Reports from both countries referred to the fact that the bilateral relationship was based on democratic values. The US statement also referred to “tolerance” and “equal opportunity for all citizens”. The countries also discussed deepening the Major Defense Partnership and they extended research collaboration through the Vaccine Acceleration Program (VAP) through 2027. The US statement clarified that the leaders discussed the expanding cooperation to include antimicrobial resistance and non-communicable diseases such as diabetes and cancer. . Mr Modi’s delegation included External Affairs Minister S. Jaishankar, National Security Advisor Ajit Doval, Foreign Secretary Vinay Mohan Kwatra and Additional Secretary Vani Rao. Mr Biden’s delegation included US Secretary of State Antony Blinken, National Security Adviser Jake Sullivan, DFC Chief Scott Nathan and White House Indo-Pacific Chief Kurt Campbell and members of his team.
Bilateral talks with Albanese, Kishida
Modi also met with new Australian Prime Minister Anthony Albanese and Japanese Prime Minister Fumio Kishida on Tuesday for separate bilateral talks. In his conversation with Mr. Kishida, who had visited India in March 2022, the Prime Minister reaffirmed cooperation in a number of areas, including the Japanese-funded Mumbai-Ahmedabad high-speed rail project, for which a third loan tranche is expected soon. Mr. Modi and Mr. Kishida also spoke about fulfilling a pledge to secure five trillion yen in public and private investment from Japan to India over the next five years. In talks with Australia’s prime minister, who was only sworn in on Monday after winning the general election over the weekend, Mr Modi invited Mr Albanese to India. “The two leaders reviewed the multi-faceted cooperation within the framework of the comprehensive strategic partnership, including in trade and investment, defense manufacturing, renewable energy including green hydrogen, education , science and technology, agricultural research, sports and people-to-people connections,” an MEA statement on the meeting said. According to Kwatra, who spoke to the press after the meetings, there was general appreciation at the Quad and some of the bilateral meetings of India’s “comprehensive” response to COVID-19. The Foreign Secretary was responding to a reporter’s question about whether Mr Biden had told Mr Modi that India’s handling of COVID-19 was better than China’s, according to some reports Indian media. Source: The Hindu