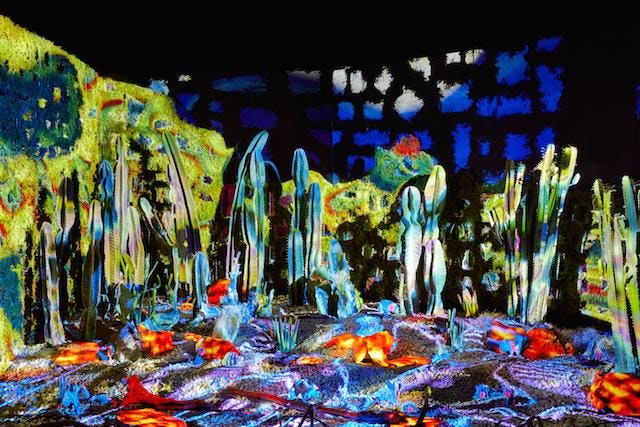 An Instagram experience with technology, art and environmental education

We’ve all heard of this new series of experiential “museums” aimed at the Instagram generation. There’s the Ice Cream Museum, which started the trend, thanks to stars like Kim Kardashian and Beyoncé posting their tours on Instagram; 29Rooms, which aims to merge together ”art, activism, style and technology ”; and the Pizza Museum, which was dedicated to everyone’s favorite handmade dough and cheese concoction. Now experiential designer Valentino vettori just opened an elaborate experiment called Arcadia on 718 Broadway in New York with the aim of evoking a sense of enjoyment through the interaction with technology and art, with the added benefit of learning how plastic, pollution and industry have an impact on the environment and the fauna that inhabits it.

“A single drop of chemical sunscreen can contaminate a coral reef the size of six and a half Olympic swimming pools,” Vettori tells me as I begin my tour of Arcadia, which opens September 1. “How could people not know that?” Vettori wanted to educate the public about environmental concerns they are rarely told about, so he designed Arcadia after a visit to a summit conference where he heard Paul hawken, the author of Drawdown: the most comprehensive plan ever to reverse global warming . “What good is it that I put money aside for a purse [for his children], if in 20 years we no longer have a planet? Vettori asked. “I am not joking.” Vettori therefore pledged to Hawken to do something to help save the environment by creating, according to a statement, a “center where artists, communities, activists and institutions could come together to engage. in environmental solutions ”.

Vettori has designed a sprawling exhibition spread over 15 rooms that offer visitors fun activities. The experiential designer brought in environmental artists like Samuelle Green, Tamara Kotianovsky, Etty Yaniv, Cindy Roe, Poramit Thantapalit, Jesse Harrod, Justin Bolognino / META, Katie Donahue, Katharina Hoerath, Charlotte Becket, Emmy Mikelson and Basia Goszczynska to contribute during installation. , which also makes for great Instagram photos. Scan an iPad above a wall to see animated sea creatures swimming. Want to know which seafood is safe to eat? Simply scan your phone with a QR code and a list of establishments appears. Want to feel what it’s like to swim under the ocean? Put on a pair of virtual reality glasses hanging from the ceiling and you’ll soon find yourself admiring marine life downstairs.

“If in 25 years we don’t stop, we will only have algae and jellyfish in our ocean,” Vettori explained. I also learned that 23 billion plastic bags are used each year in New York State and I felt a sense of relief as soon as Vettori told me that there would be a ban in place on it. next year. Goszczynska created a cave with 44,000 plastic bags – the number of bags used in New York City every minute – to demonstrate the impact. The bags never biodegrade in the environment. Goszczynska explained that she used bags ready for recycling. Goszczynska wanted the cave to symbolize “coming out of the cave ages, going out like the Allegory of Plato’s cave, coming out of ignorance, leaving plastic bags behind.” “

Vettori has also ensured that everything in Arcadia is recycled, environmentally friendly and biodegradable. At the end of the exhibit, visitors can engage (and take selfies) by promising not to waste food, to buy responsibly, not to use single-use plastic, and to engage. to pay attention. Then there is a store that offers a wide range of eco-friendly products, ranging from housewares to beauty. Better yet, the proceeds from ticket sales plant a tree and go to Global Oceanic, Arcadia’s charitable and educational partner.

“All I want is people to come,” said Vettori. In doing so, visitors will not only get a memorable, tech and art-rich experience and memories on Instagram, but they will also receive education about our planet’s environmental crisis and what we can do to save it by being a part. of the Solution.

Tickets for Arcadia are available at arcadia.earth.