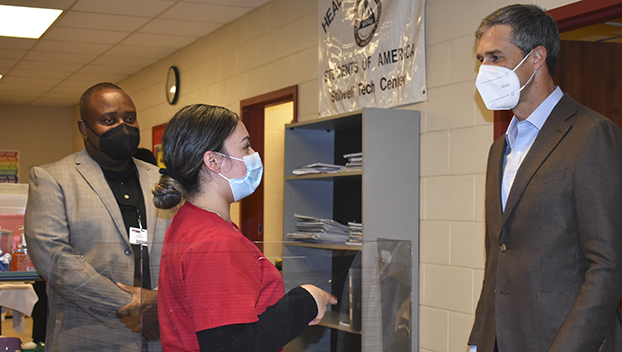 For nursing student Jas’Lique Williams, talking to a former presidential candidate is not part of her daily life.

However, after explaining her role as a health science student at Memorial High School’s Center for Career and Technology Education, Beto O’Rourke would later refer to her as Dr. Williams.

O’Rourke, who won the Democratic vote for Texas governor in the March primaries, visited the high school on Wednesday to speak with students, teachers and city leaders. While there, he toured classrooms in the CATE building, including the health science internship where Williams is a student.

Williams, a senior, is looking to enlist in the military and then pursue a career as a trauma surgeon, she said.

Not yet old enough to vote, she was impressed by the candidate’s initiative to visit the school and speak with the students.

As a CATE student, she believes the program is important and called it a springboard to use for the future and a way to get your foot in the door.

Maria Ortiz, a health science student, is considering a career as a registered nurse. She appreciates that the program gives her the chance to advance in her chosen field and thinks that students should participate in the opportunities offered by the program.

The visit took place in the CATE building inside and outside the classrooms where the students were busy at work.

At the end of a hall was the large space for the welding class. Barbecue pits of various sizes, including one about the size of a 55 gallon drum. John Pitre, 18, told O’Rourke that he had been working on the pit for a few weeks and had been on the program for three years.

“And what comes next?” Will you be certified when you graduate? O’Rourke asked.

Pitre replied in the affirmative and when asked if he had a job waiting for him in Port Arthur; he said he’s pretty sure he can find one.

Looking at the pit, O’Rourke wondered what was happening to him – does he keep it, give it away, or is it school property.

“I would like to keep it, but I wouldn’t be upset if someone wanted it,” Pitre said.

Edwin Flores, a welding course senior, said he plans to enter the workforce after graduation as he will earn a two-year welding certificate.

Flores chose to take the course because he saw his welder father and wanted to follow in his footsteps.

Port Arthur Independent School District Superintendent Dr Mark Porterie said the district is delighted to showcase the facilities at CATE and are proud of the staff and students.

“Our CATE department prepares our students for the professions that drive our economic growth; healthcare, manufacturing and more are the economic powerhouse of our community and we want our students to be able to grow into these careers,” he said.